Posted on September 1, 2011 by karanewman 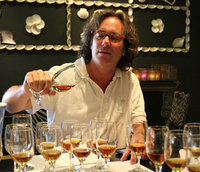 Mark your calendar – Wednesday, Oct. 19 is the next Drink.Think reading event!

Once again, we’ve got a great line-up of writers slated to read from their work — and over the next few weeks, I’ll entice you with mini-biographies, starting this week with Warren Bobrow.

Now, if you’re out and about in the NY food and drink scene, surely you’ve run across this chap. Somehow, the man seems to be everywhere — He’s at spirits launch parties. He moderated a panel on food writing I attended at the IACP regional conference. He was front and center at a rum seminar I attended at Tales of the Cocktail in New Orleans (he’s a rum judge for the Ministry of Rum, so that makes perfect sense). And all the while, Warren manages to tweet up a storm like it’s an Olympic sporting event–go ahead, follow him @WarrenBobrow1.  I dare you.

Warren is a prolific writer off Twitter, too:  he’s the Food and Drink Editor of the 501c3 non profit Wild Table on Wild River Review; he is a cocktail writer for William-Sonoma’s Blender Blog, Foodista and Serious Eats; and his research on Biodynamic and Organic Wine and Food will appear in the 2012 Oxford Encyclopedia of Food/Drink in America, Ed. 2.